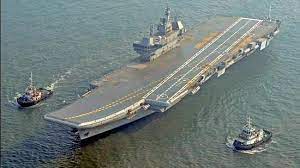 After two successive high profile visits – the President and Vice President of India – within a span of less than two weeks, IAC Vikrant is heading out for the next set of sea trials.