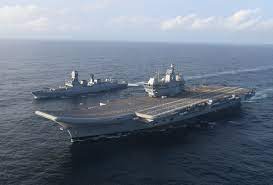 The commissioning of India’s first Indigenous Aircraft Carrier (IAC-1) into the Navy as INS Vikrant marks a defining moment.