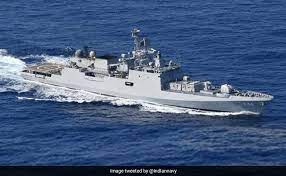 The Indian and Algerian navies participated in a maiden naval exercise off the Algerian coast in a bid to increase maritime cooperation.