India, Israel, The US, UAE Are Participating In The I2U2 Summit: 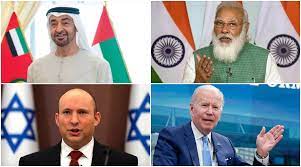 The US President will host a virtual summit with the Prime Minister of India, Israel Prime Minister and UAE President during his visit to West Asia from July 13 to 16. The new grouping will be called “I2U2” — “I” for India and Israel and “U” for the US and UAE.