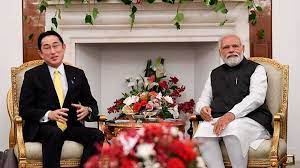 Japanese Prime Minister Fumio Kishida arrived in India for his first visit to the country as the head of government. He met PM Narendra Modi for bilateral talks.