INS Valsura Has Been Awarded The Prestigious President’s Colour: 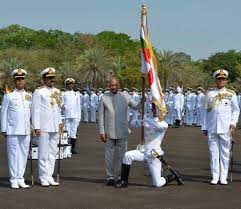