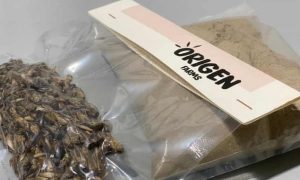 Jayanti has become the twelfth subgenus, or species, of cricket identified under the genus Arachnomimus Saussure, 1897.