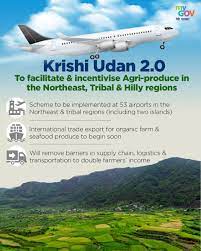 58 airports will be covered under Krishi Udan Scheme 2.0