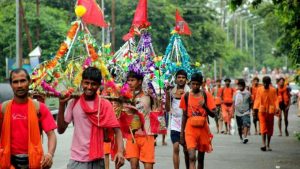 It is a pilgrimage organised in the Hindu calendar month of Shravana (Saavan).