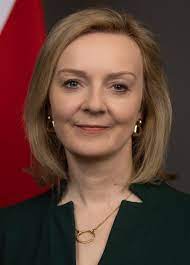 UK Foreign Minister Liz Truss has been elected as the next Prime Minister of United Kingdom and leader of the governing Conservative Party.