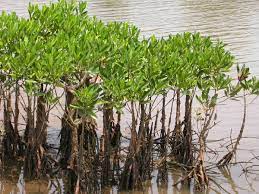 The Odisha government has proposed to raise mangrove and casuarinas plantations in the coastal belt.