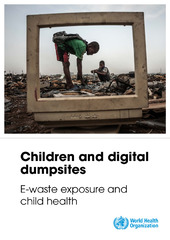 The new report, titled Children and Digital Dumpsites, was recently released by the WHO.