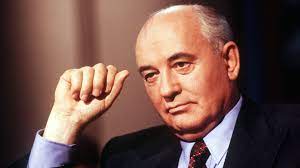 Mikhail Gorbachev, the former Soviet leader who brought the Cold War to a peaceful end, has died aged 91.