Neobank : 100th Unicorn In The Country 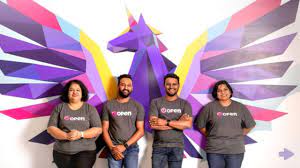 India’s wave of unicorns reaches an all-time high with Neobank Open becoming the 100th unicorn in the country.