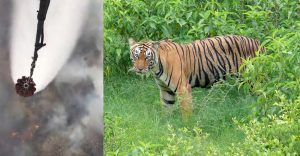 A massive fire broke out inside the Sariska Tiger Reserve (Rajasthan). The fire spread and destroyed around 10 sq km of forests despite timely satellite warnings and the availability of a real-time mobile application-based fire response system.