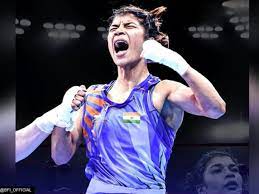 Nikhat Zareen became the fifth Indian woman to win a World title at World Women’s Boxing Championships 2022 in Istanbul by defeating Thai Olympian Jutamas Jitpong at 5-0 in the 52 kg category.