State Of The Global Climate For 2020: 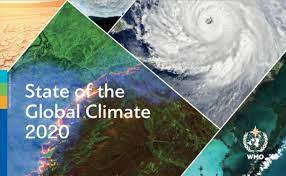 The World Meteorological Organization (WMO) released its annual State of the Global Climate for 2020.