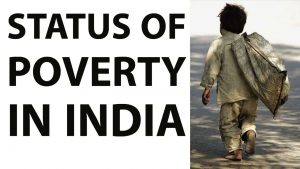 According to policy research working paper of World Bank, Poverty in India is 12.3 percentage points lower in 2019 as compared to 2011.