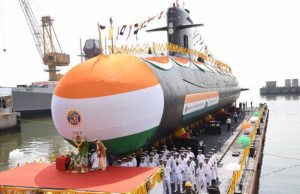 Yard 11880, the sixth and last submarine of the Indian Navy’s Kalvari class submarines of Project 75 has been launched at the Kanhoji Angre Wet Basin of Mazagon Dock Limited (MDL).