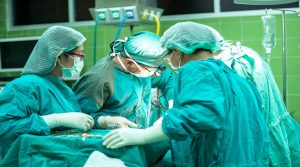 Some Cases of a Mysterious Liver Disease have been reported in Spain, Denmark and the Netherlands, besides the US and UK.