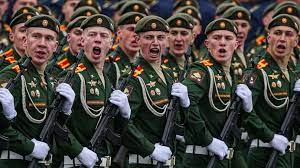 May 9 is celebrated as “Victory Day” in Russia