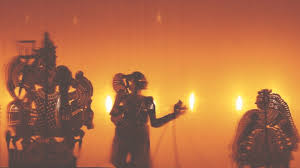 For the first time, Tholpavakkoothu, the famous shadow leather puppets will tell stories of the epic Ramayana with the help of robots.