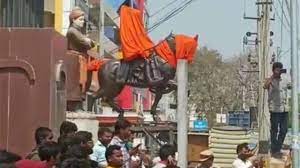 Section 144 has been imposed in Bodhan town in Telangana after protests turned violent over the installation of a statue of Chhatrapati Shivaji at Ambedkar junction in the town by the Shiv Sena and BJP workers.