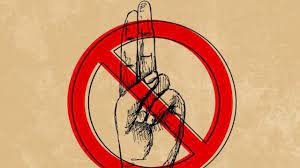 The Supreme Court recently said that those conducting the ‘two-finger test’ on alleged rape victims will be held guilty of misconduct.