Coronal Holes Spotted On The Sun: 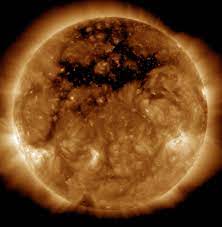 A phenomenon called “coronal holes” was recently spotted on the sun.