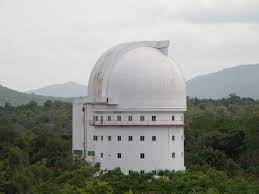 Discoveries of the 40-inch telescope at the Vainu Bappu Observatory were highlighted at its 50-year celebration.