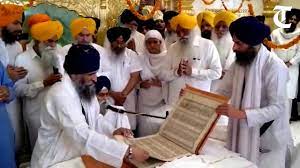 Among the most striking images emerging from the flight of Sikhs from Afghanistan have been those of Union Minister Hardeep Singh Puri carrying on his head, one of the saroops of the holy Guru Granth Sahib flown in from that country.