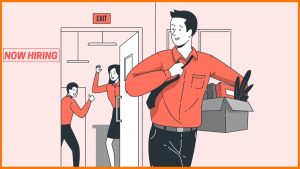 In 2020, resignation rates across the US plummeted due to the fear and uncertainty caused by the pandemic.