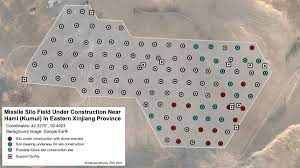 Satellite images have revealed that China is building at least three missile silo fields in Yumen in Gansu province, near Hami in Xinjiang province, and at Hanggin Banner, Ordos City, in Inner Mongolia.