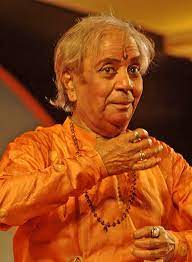 The famous Kathak dancer Birju Maharaj, who took the traditional Indian dance form ‘Kathak’ to the world stage passed away.