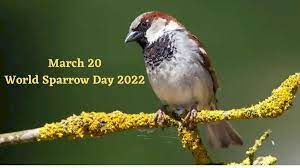 Every year March 20 is observed as World Sparrow Day to raise awareness about the bird.