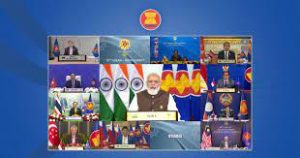 India participated in the 18th India-ASEAN Summit at the invitation of Brunei, the current Chair of ASEAN.