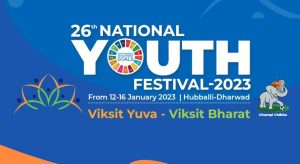 Prime Minister of India will inaugurate the 26th National Youth Festival in Hubballi, Karnataka on 12 January 2023.