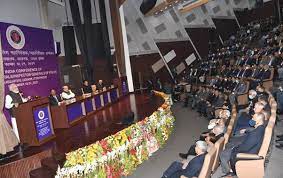 Prime Minister Modi attended the 56th DGsP/IGsP Conference at Lucknow on November 20-21, 2021. The Conference was attended by 62 DGsP/IGsP of States/UTs and DGs of CAPFs/CPOs in Lucknow.