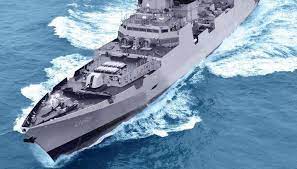 INS Visakhapatnam, a P15B stealth guided missile destroyer, was commissioned into the Indian Navy in the presence of Raksha Mantri Shri Rajnath Singh at the Naval Dockyard, Mumbai on November 21, 2021.