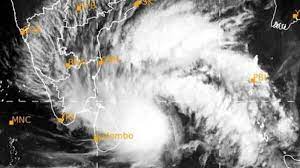 It has been reported that a cyclone may impact the Tamil Nadu and Puducherry coasts from 8th December 2022 onwards.