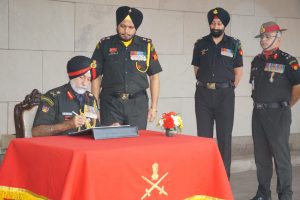 The 73rd Raising Day of Territorial Army was celebrated across the country on October 9.