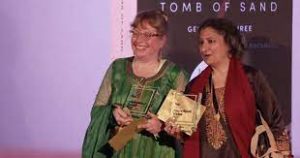 Tomb of Sand’, has become the first book written in an Indian language to be awarded the International Booker Prize.