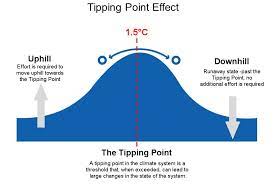 According to a major study, the climate crisis has driven the world to the brink of multiple “disastrous” tipping points.