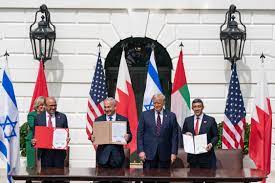 On 18 October, 2021, the foreign ministers of the United States, India, Israel, and UAE met virtually to enhance cooperation and partnerships between these states on the back of the Abraham Accords, signed in 2020, normalising relations between Israel and a grouping of Arab states led by the UAE.