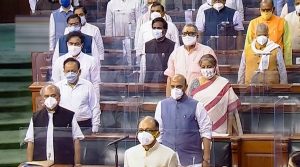 The Shiromani Akali Dal (Political Party) has decided to move an Adjournment Motion in the Lok Sabha against the government on the three controversial farm laws.