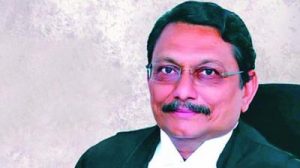 Chief Justice of India Sharad A. Bobde has recommended Justice N.V. Ramana, the senior-most judge of the Supreme Court, as the next top judge.