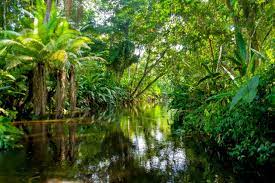 According to a recent study, Amazon Forests have started emitting Carbon dioxide (CO2) instead of absorbing it.