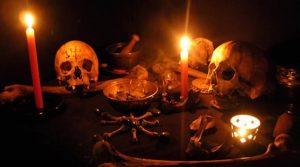 The recent killings of two women in Kerala have sparked a debate about the prevalence and power of superstitious beliefs in society.