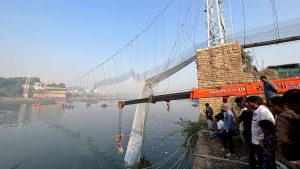 More than 141 people lost their lives when the cable bridge over the Machhu river collapsed in Morbi, Gujarat.