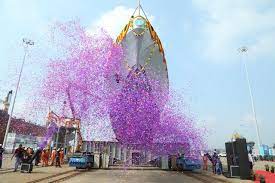 The ARNALA ship is inducted into the Indian Navy