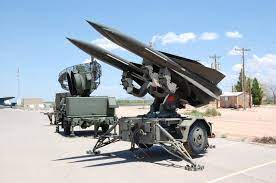 The United States is considering sending older HAWK air defence equipment from storage to Ukraine to help it defend against Russian drone and cruise missile attacks.