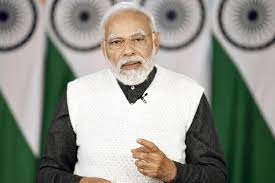 The Prime Minister of India launched the Aspirational Block Programme at the second National Conference of Chief Secretaries in Delhi.