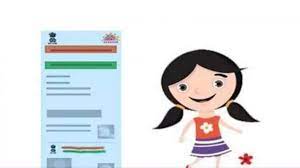 Over 7.9 million children aged up to five were enrolled under the Unique Identification Authority’s Bal Aadhaar initiative from April to July.