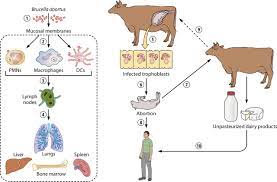 Kerala launched preventive measures after a few cases of brucellosis, a zoonotic infection, have been detected in some dairy animals.